Labour and Social Security Minister, Honourable Karl Samuda, has received the support of the Canadian Government for the commissioning of a Fact-Finding team, to investigate the working conditions of Jamaican Farmworkers in Canada.

During a Courtesy Call on Minister Samuda this afternoon (September 1), Canadian High Commissioner to Jamaica, Her Excellency Emina Tudakovic, noted that the Canadian Government shares Jamaica’s concern for the safety and security of the Jamaican workers, and commended the Minister’s decision.

The High Commissioner further noted that the Jamaican workers in Canada have maintained a solid reputation as good workers, and gave her Government’s commitment to support tactical solutions identified by the task force to improve conditions wherever necessary.

In the meantime, Minister Samuda indicated that it is essential for both governments to work closely together to strengthen the bilateral partnership to protect the interests of both the Jamaican Farmworkers and their employers in Canada, as well as the value and integrity of the programme. He added that, although the Farm Work programme had improved significantly over the decades, there is room for continuous improvement. The Minister assured the High Commissioner that the Ministry’s Liaison Service has been tasked with redoubling its efforts at ensuring that workers have easy access to existing mechanisms to facilitate confidentiality in reporting issues of poor working conditions and other concerns.

The Ministry is inviting Farm Workers, advocate groups and members of the public to report known incidences of mistreatment, poor working conditions and other concerns to the Liaison Service via its Toll-free line at 1-888-898-3951, or via email at jamliser@bellnet.ca. Reports may also be made confidentially to the Canadian authorities’ Integrity Services Branch online. 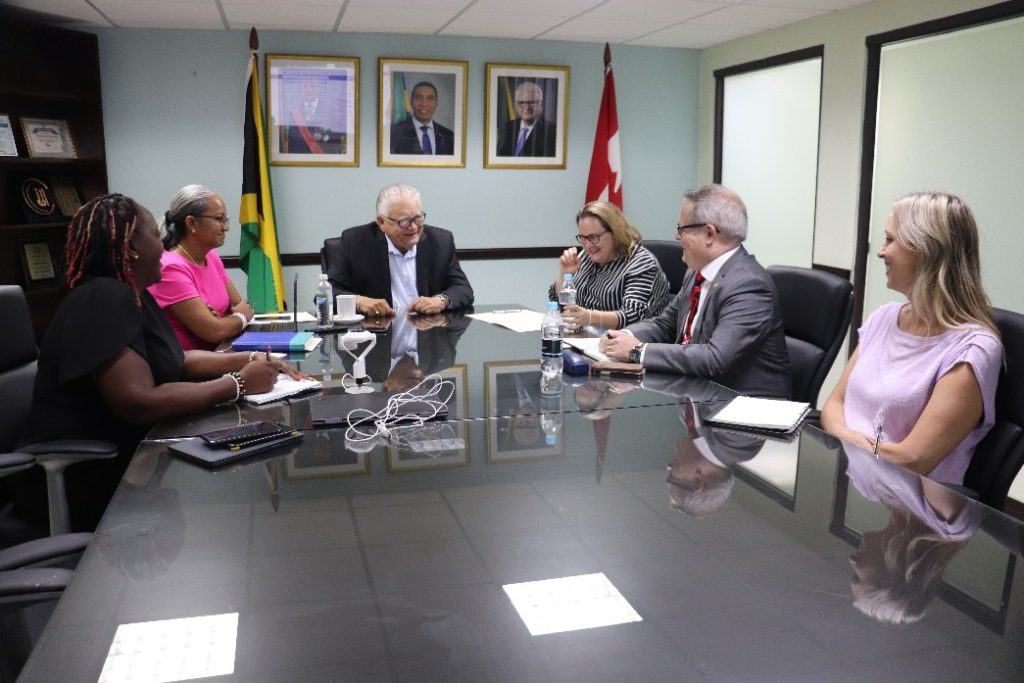 (l-r) Divisional Director for Industrial Relations, Gillian Corrodus, Permanent Secretary, Colette Roberts Risden, Minister of Labour & Social Security, Hon. Karl Samuda, High Commissioner of Canada to Jamaica, Her Excellency Emina Tudakovic, Head of Migration, Sean Morency and Head of Bilateral Relations, Stephanie O’Leary, engage in discussions regarding the Minister’s recent visit to Canada, where he led a team on a tour of nine farms on which Jamaicans are employed.